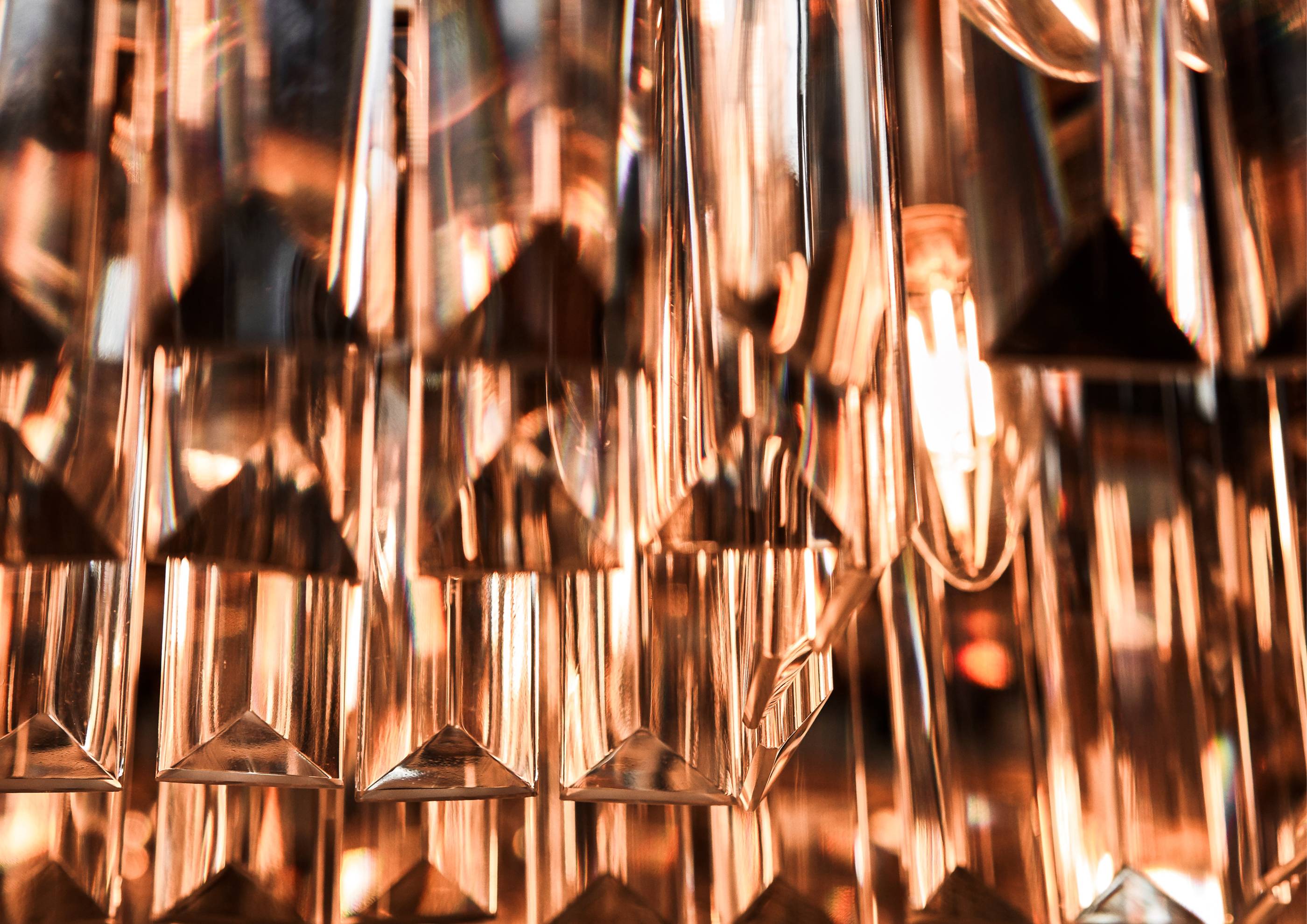 The project’s location determined the course and style of the interior. The bistro is located in one of the buildings of renovated historical territory on New Holland Island in downtown Saint Petersburg.

The former warehouse building constructed in 1849 with high ceilings and historical brick has its large windows facing the Admiralteisky Channel Embankment which makes the space brightly illuminated and open.

First off, the agency was presented with the challenge to design a cozy, beautiful interior environment which would meet the concept of the establishment as well as to preserve the vibe and the spirit of the location. When coming to the bistro, the customer should feel a homey immersive atmosphere reminding them of a living room in a Saint Petersburg intellectuals’ apartment from the days of old.

Our goal was to create such a space which would not have a single alien element that might undermine the feeling of unity and authenticity of the place. For this reason, all objects in the interior environment were selected with special care and each of them has its own history.

he conceptual solution came virtually at once. However, the implementation required considerable effort. The main challenge was that the project was an experiment of sorts to the agency: the work in an unusual style always requires particular attention and makes it necessary to think over all solutions in more detail. Even it might seem to be accidental at first glance, each interior element went through a many-stage selection system. In the end, despite all fears, with all elements combined, it proved to be much better than we could have ever imagined.

Some interesting facts which give this project a noble touch of the old times. The floor board: solid, old. It was shipped from Vologda Region, specifically from a disassembled old Russian house of the late 19th century. The board thickness is about 6 cm (before installment it was twice as thick). We left it somewhat “alive” on purpose: the surface was not turned to an ideal plane, we kept the checks and knots.

The support beams for the bar counter were transported from another site in the Petrogradskaya Side – the lost pre-revolutionary building. They are over 150 years old. In order to achieve a burnt look the beams were specially treated in an oven.

The large lighting fixtures over the bar counter were dismantled from a workhouse of the Soviet time. They are a stock item of the Soviet era. They were restored and painted a latten color. We gathered the vintage furniture from all over the city dropping by every commission store.

We kept an eye for interesting objects online on daily basis.

The wall mural was made by an artist as per a signature design sketch using liquid gold.

And, of course, one should mention the ideal work done by our florist who managed to arrange all plants exactly like it had been envisioned by the project’s authors. 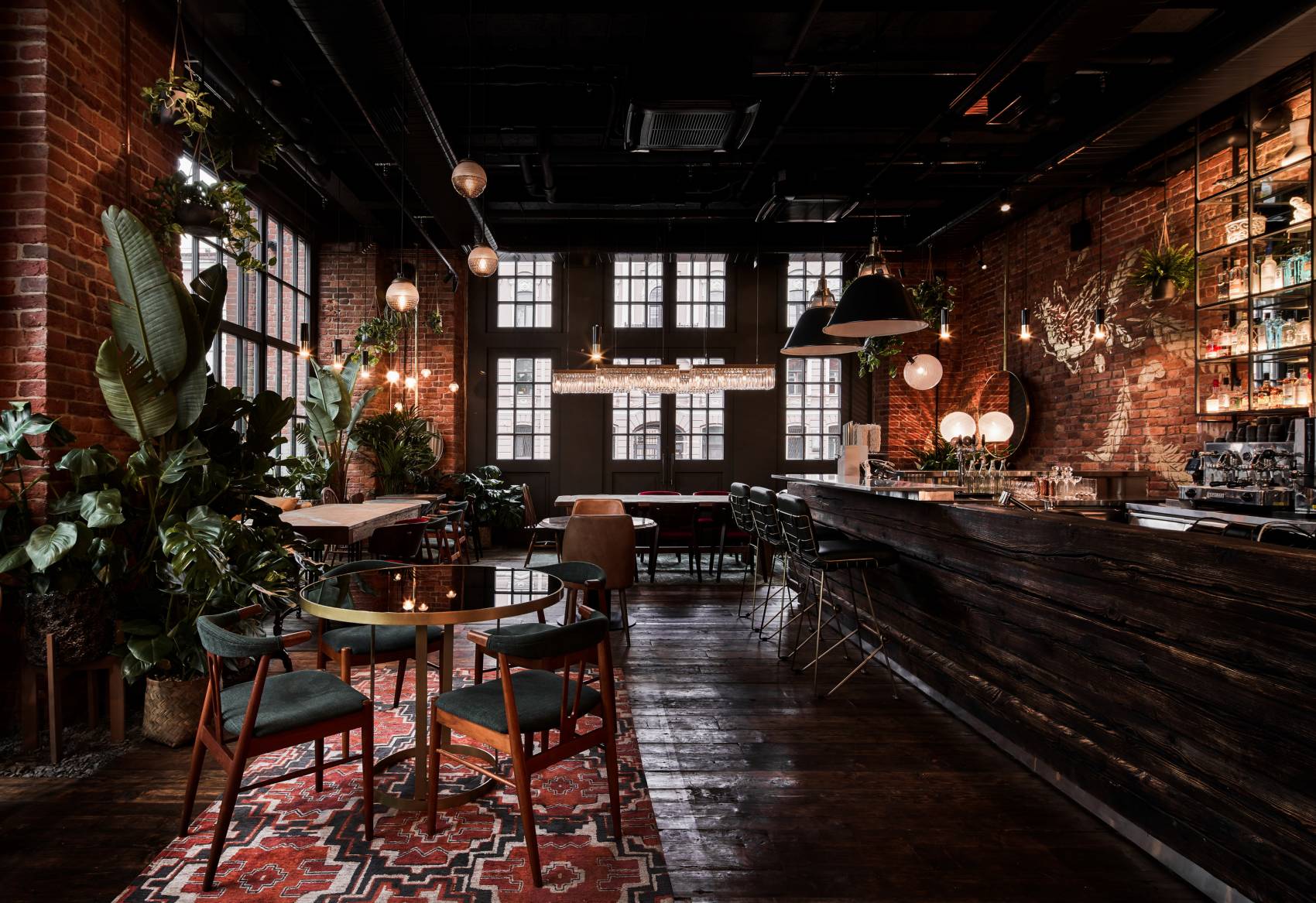 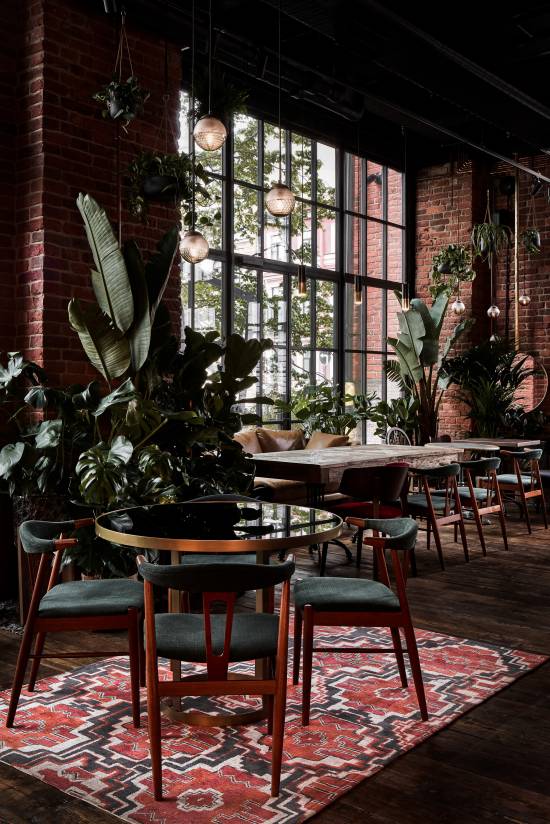 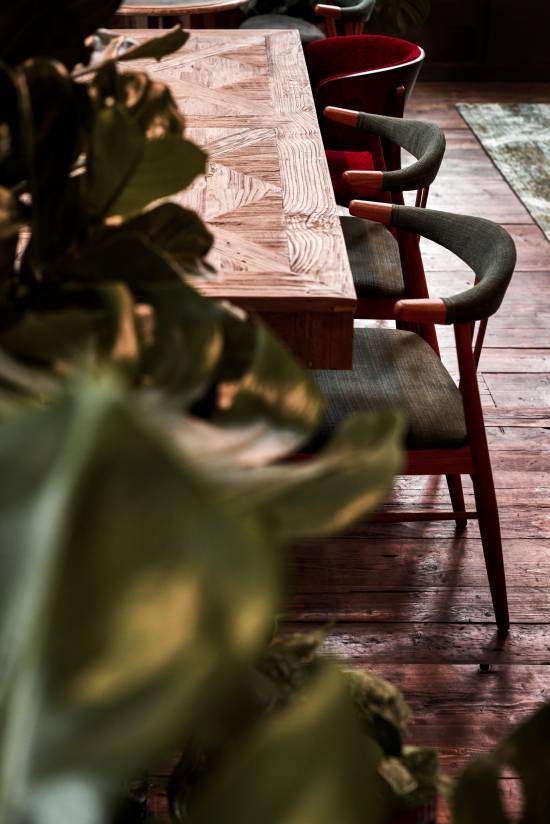 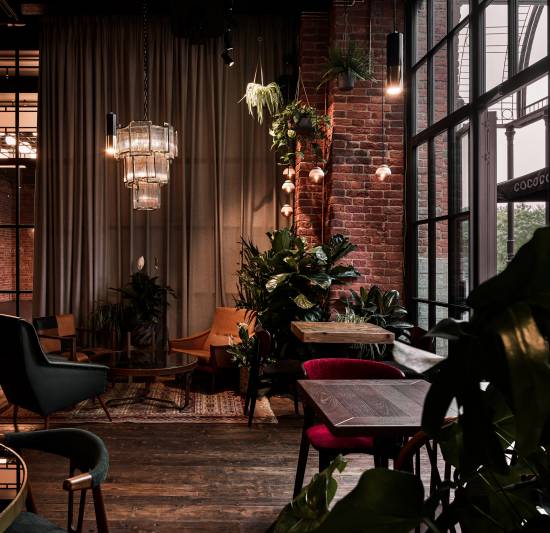 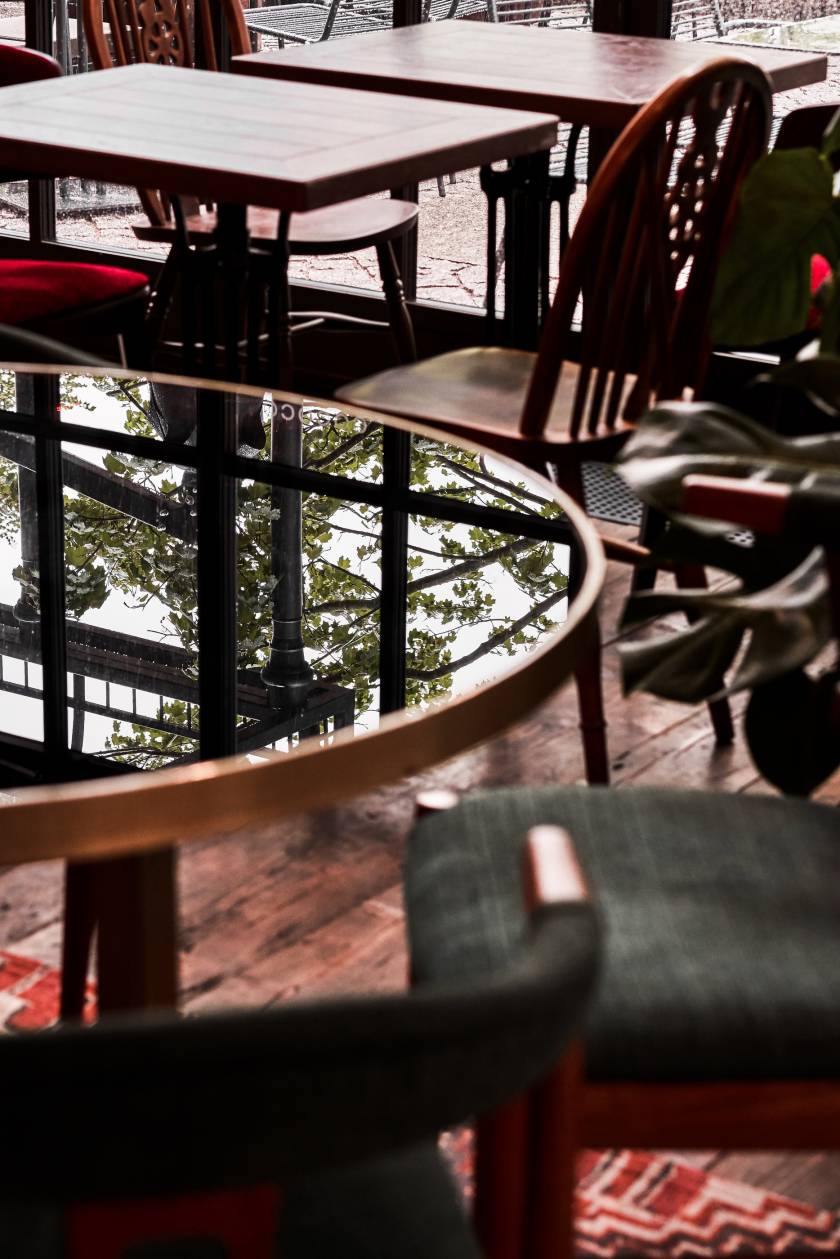 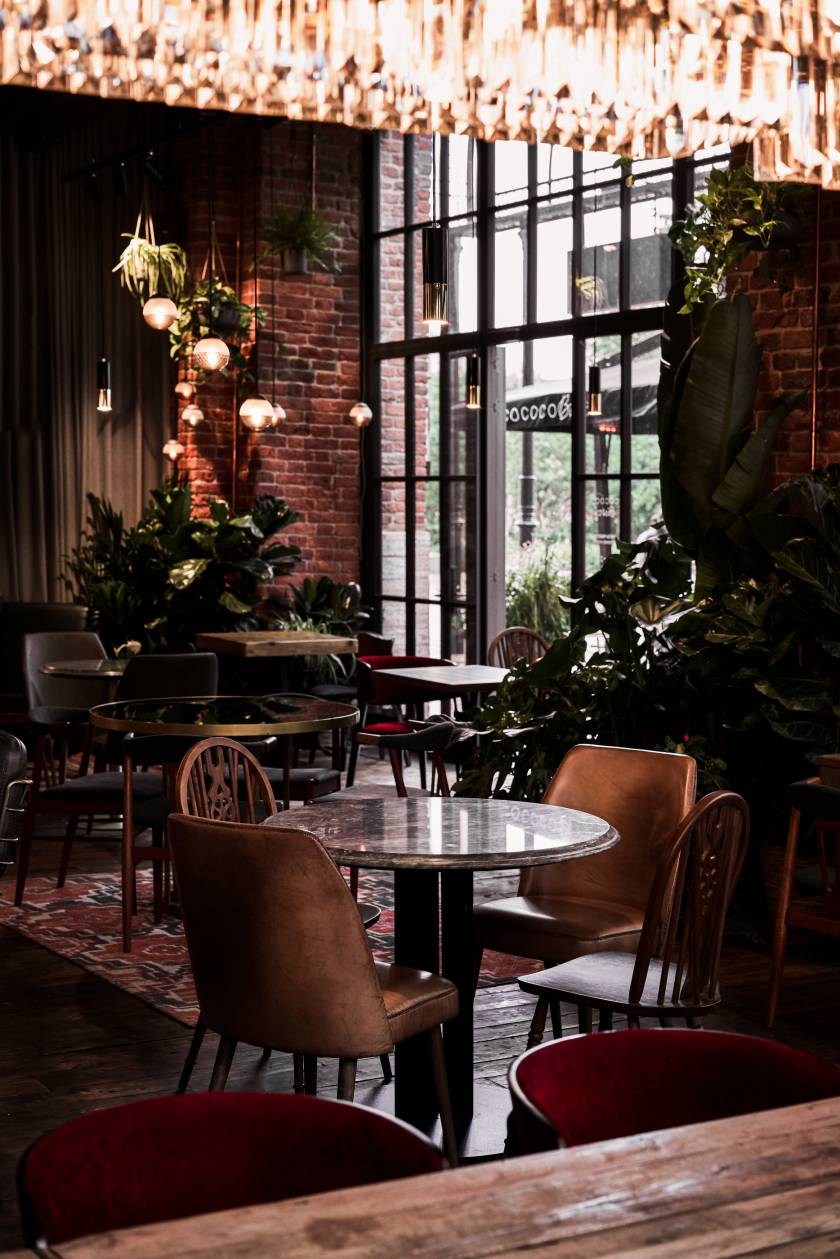 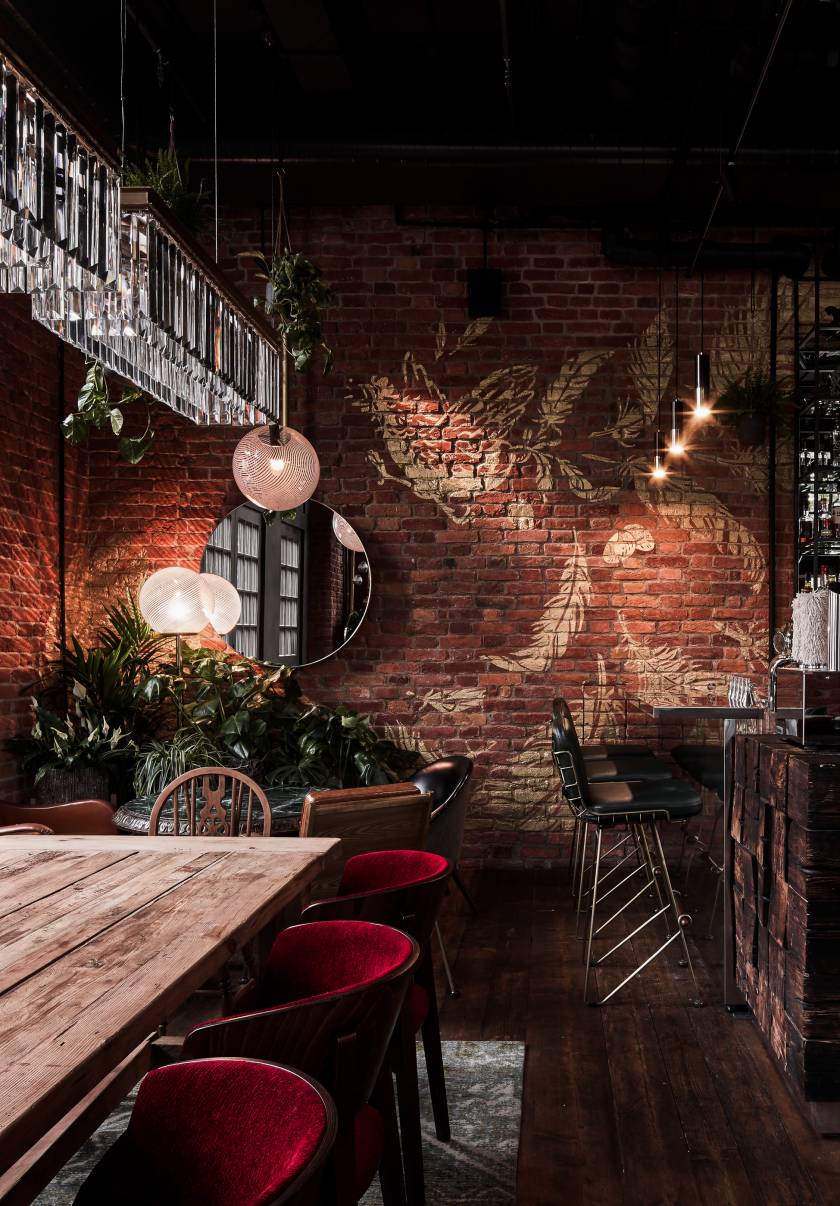 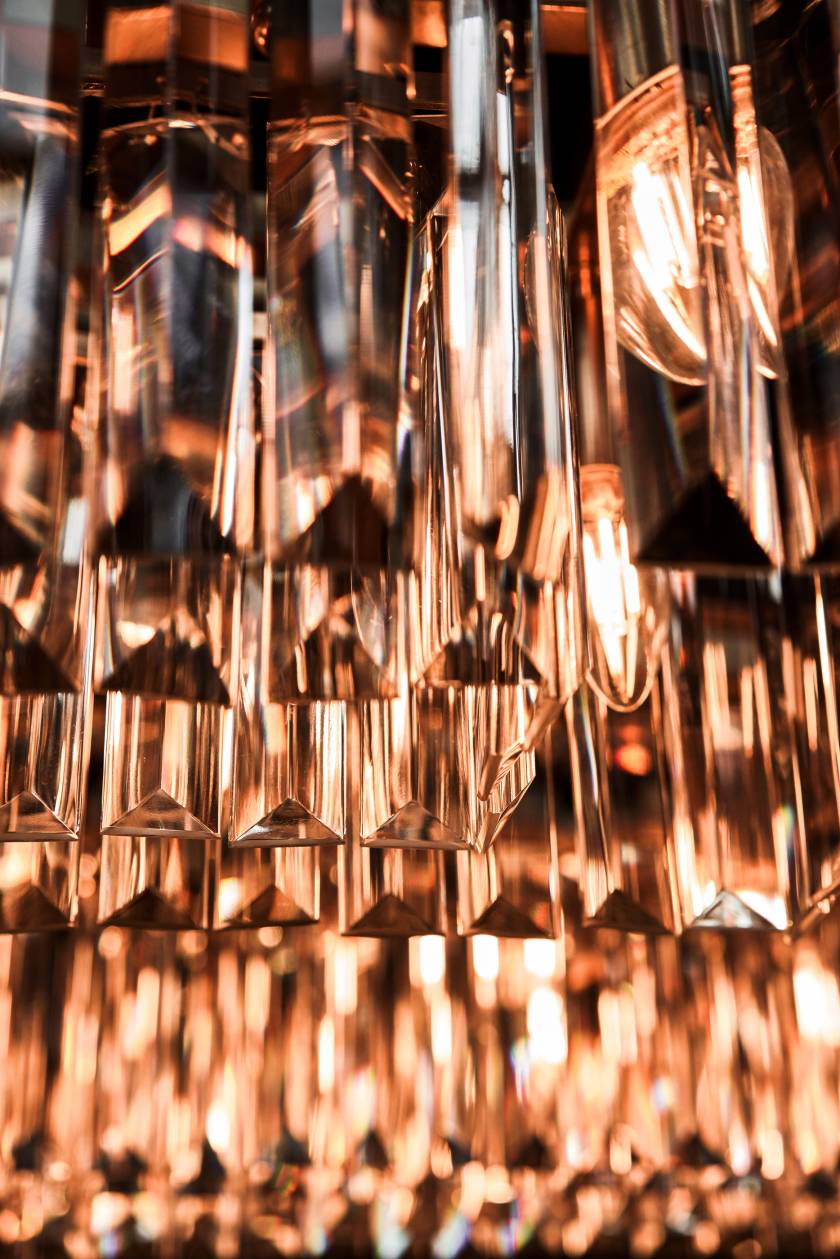 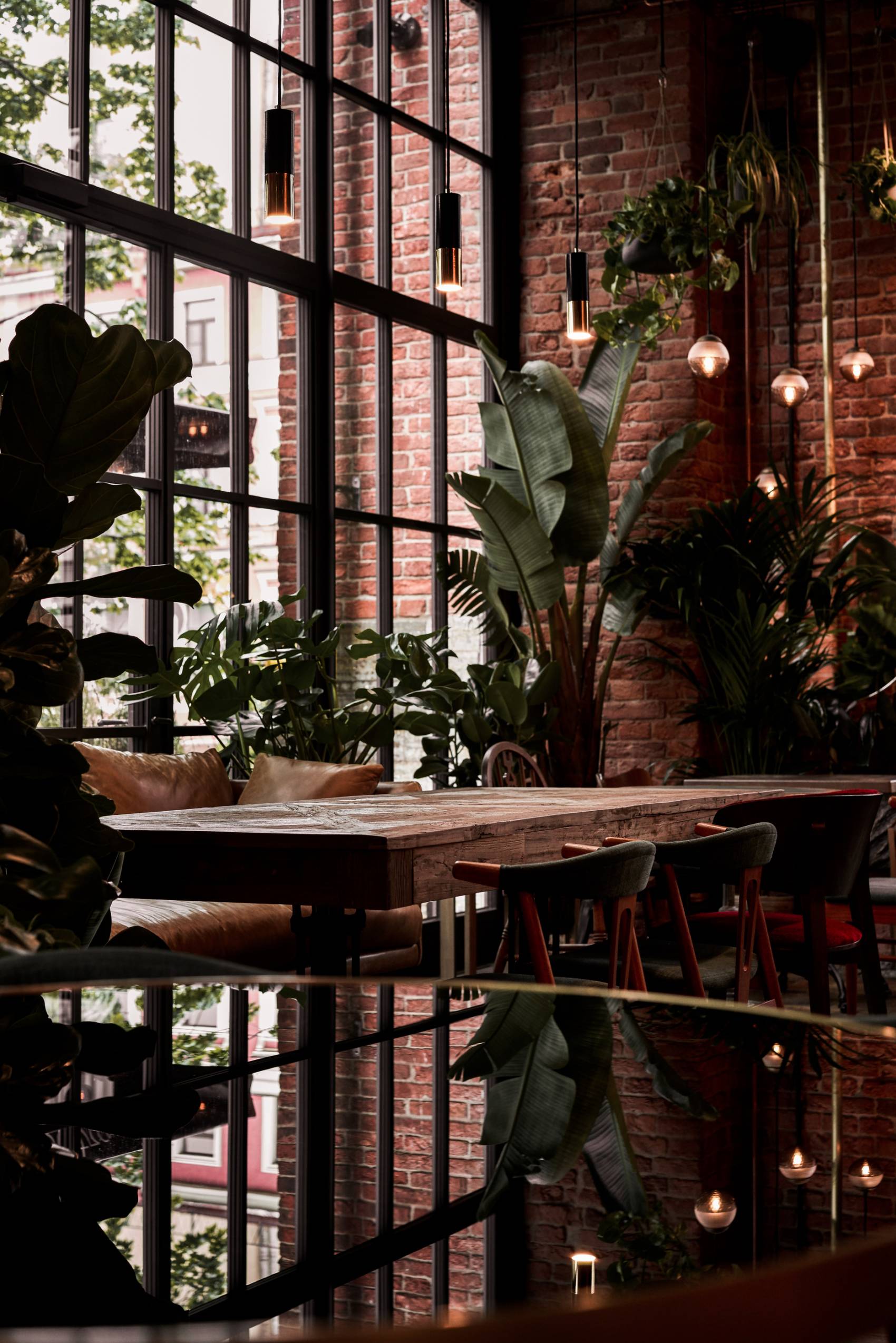 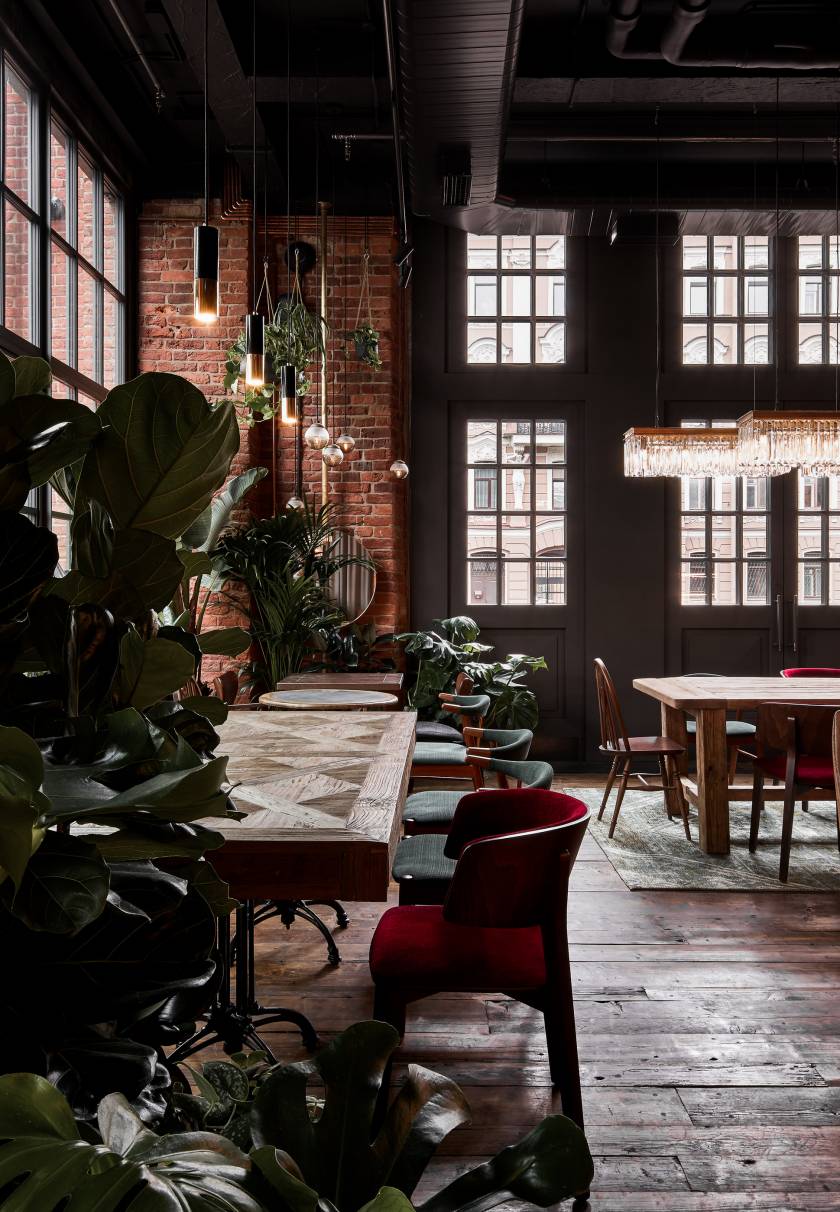 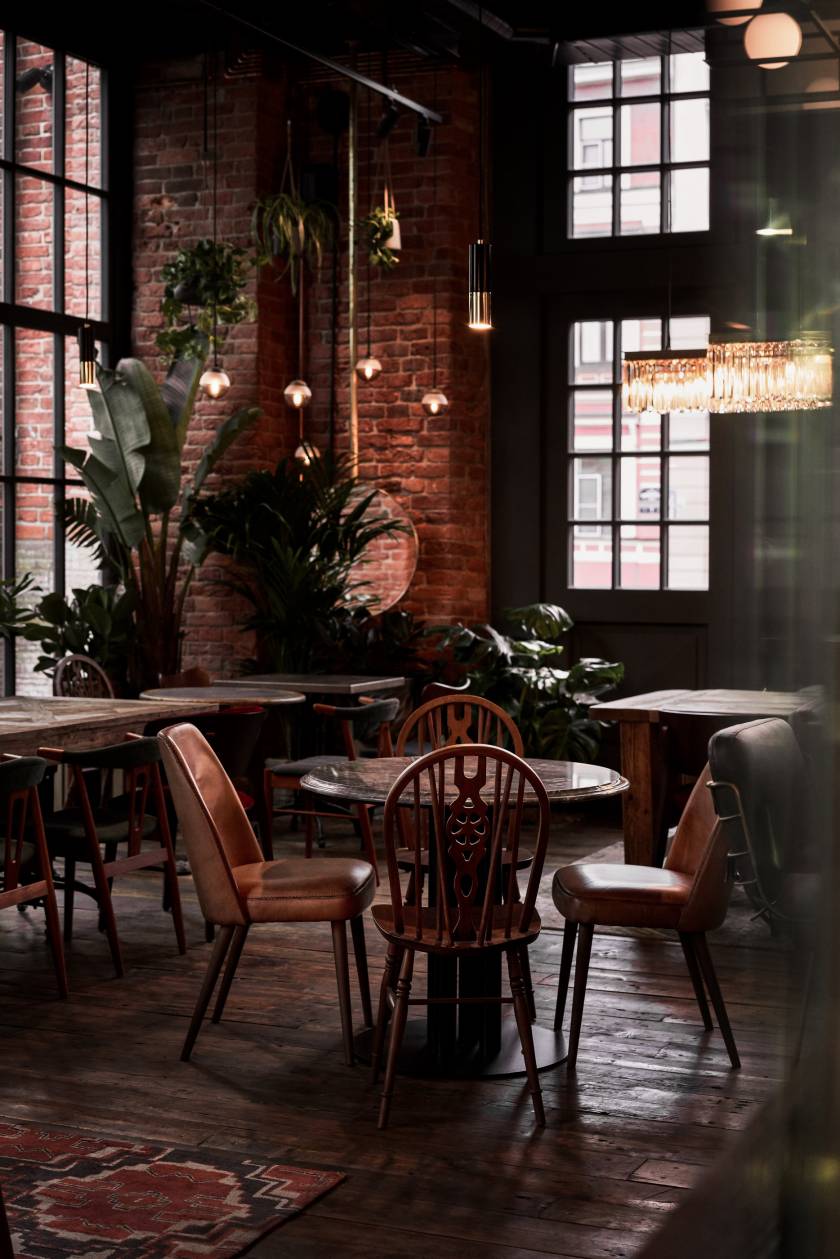 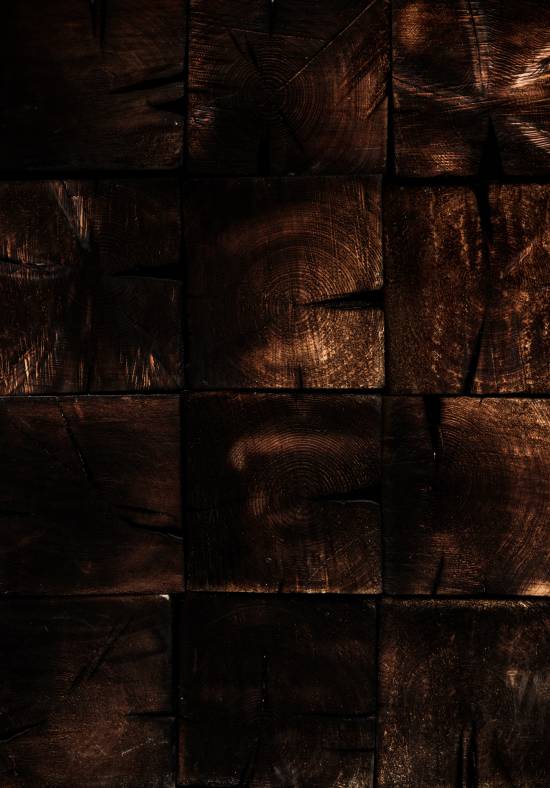 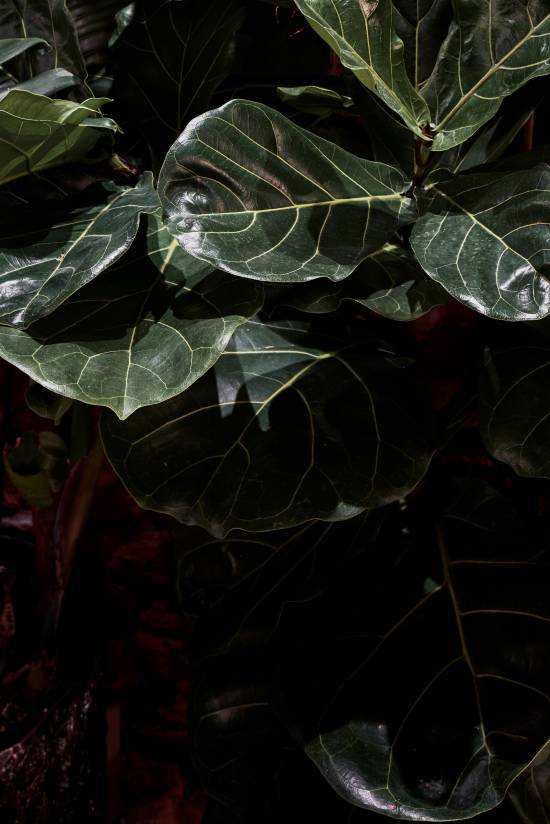 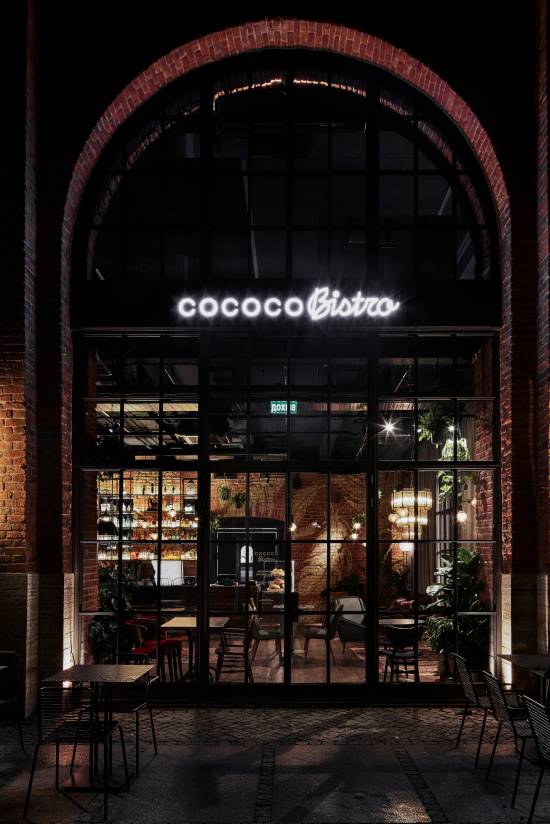 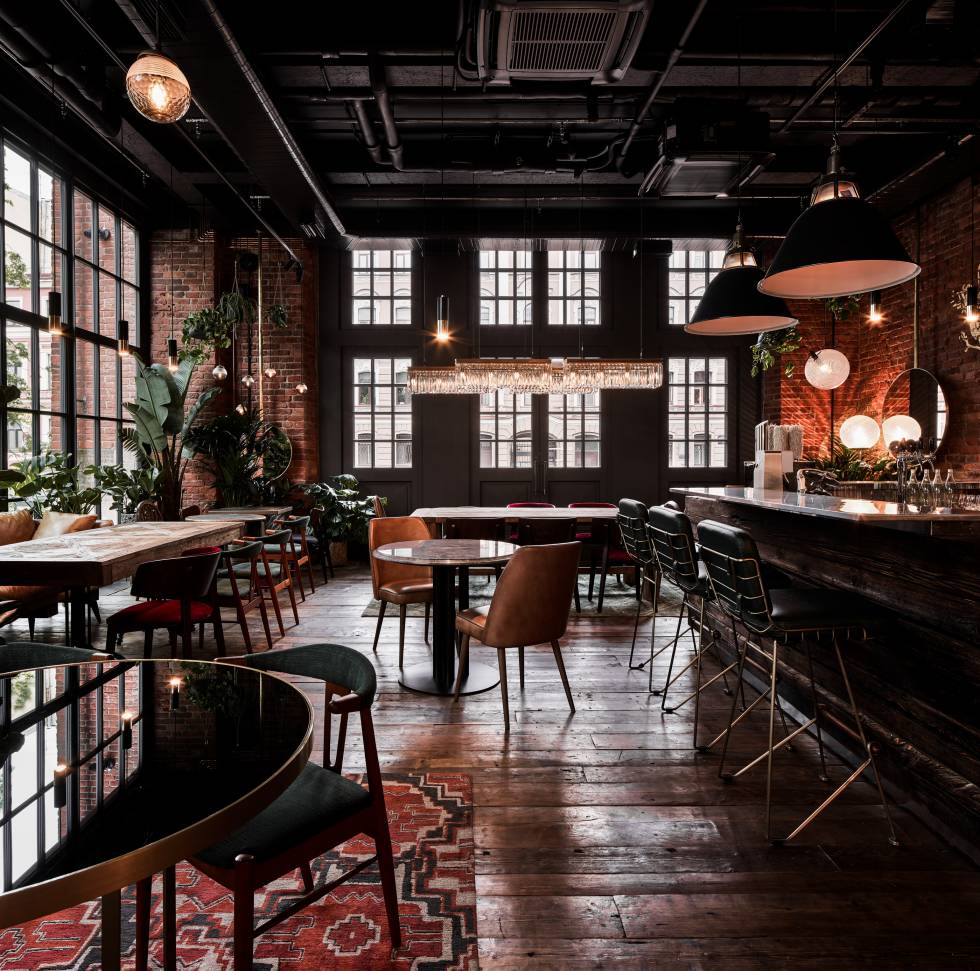 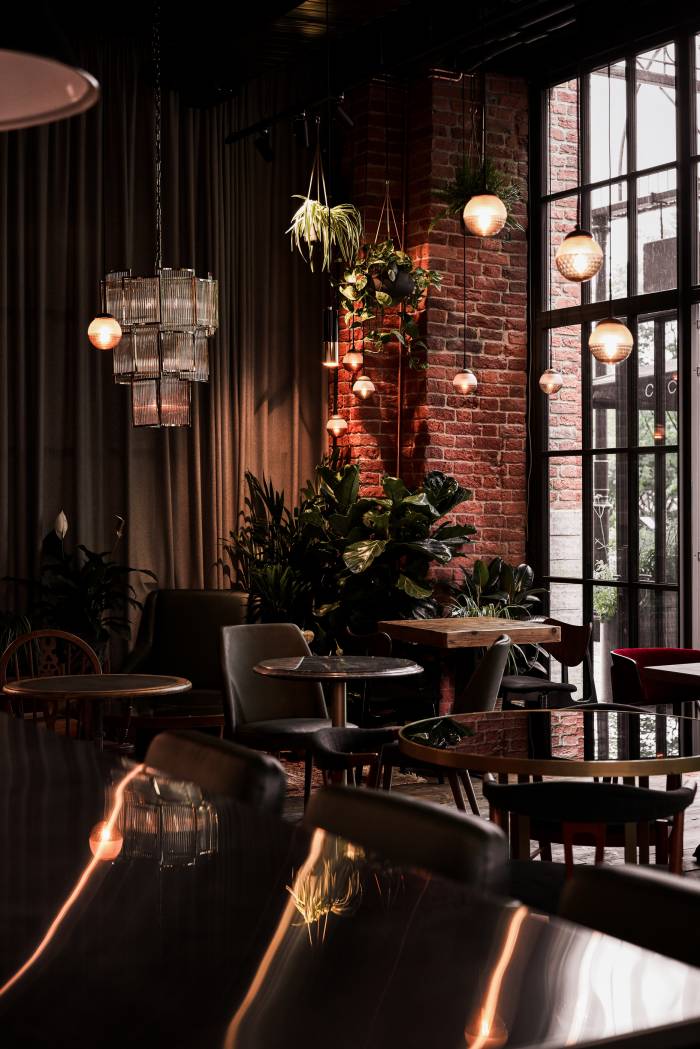 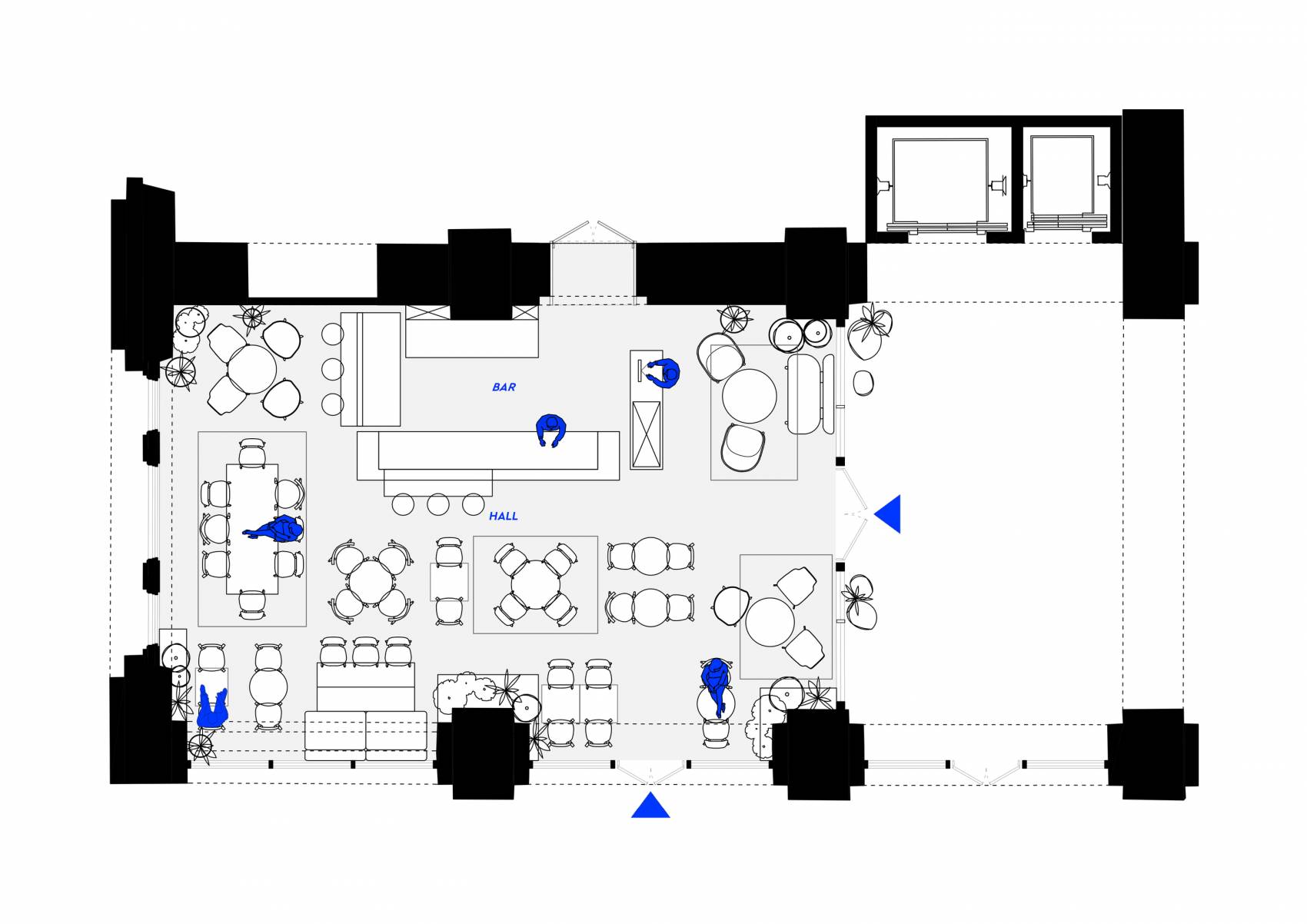 go to category
MONA restaurant
restaurants & bars st.petersburg
150 m2
back to all 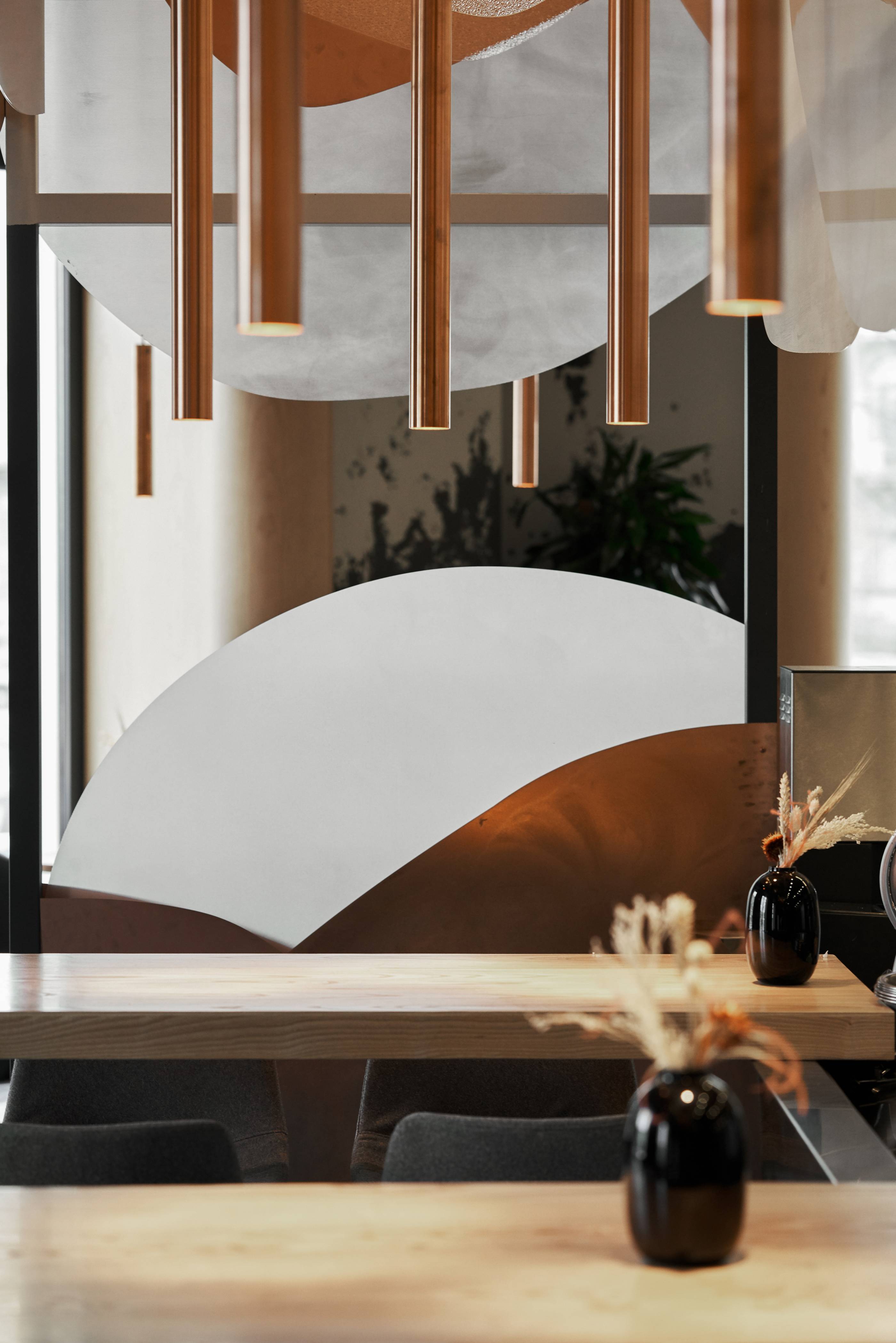